The History of the Bluthner Piano

Although Bluthner came into prominence at the same time as Bechstein, the qualities of the instruments contrast greatly. The Bluthner piano has a much clearer tone than the extravagant sound of the Bechstein, and the hammers and felts it uses are more compact.

Wilhelm Kempff described his Bluthner as being 'precise' and of 'unrivalled beauty.'

Julius Bluthner set about creating his company in 1853 , endorsing the philosophy of "Quality above everything". Eight grand pianos and two squares had been built by the first year.

He began displaying his instruments at exhibitions in 1854 where their potential as professional concert pianos as well as their elaborate case styles were highly acclaimed.

The path into the international market was paved in 1862 at an exhibition in Mersburg. The valuable medals and prizes the instruments claimed as a consequence throughout the history of the company can still be found on the soundboard of every instrument.

The increasing demands of the instruments lead to the enlargement of the factory in 1876 . In 1878 a concert hall was built in West Strasse, Leipzig; the location of the firm's headquarters. Instruments could be exhibited against a lavishly decorated background. 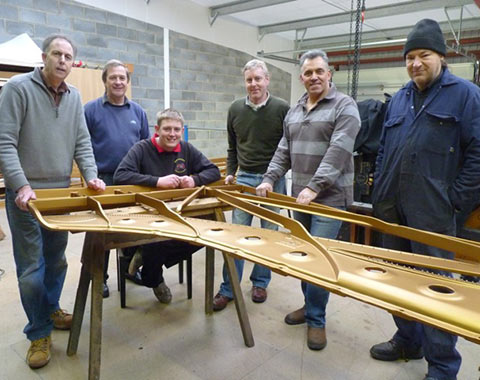 It was in 1890 that Bluthner became one of the most important European piano firms. It was on increasingly high demand in Australia, South America and South Asia. Despite historical changes, Bluthner's impressive reputation is still maintained today.

In 1929 Bluthner published its first edition of the journal 'Bluthner Freund'. It would go on to be published about three times a year. It informed pianists, music enthusiasts and avid supporters of Bluthner fascinating facts about its factory and concert life news.

In 1932 the German Admiralty asked Bluthner, with its innovative image, to build a lightweight grand piano for the airship Hindenburg. A piano concerto was performed and broadcast live on the first crossing of the Atlantic. The success impressed everyone greatly, and the technological accomplishment was marvelled at.

The Bluthner factory was hit by an air raid at the end of 1943 . It was rebuilt by Dr Rudolf Bluthner-Haessler in 1945 when the war was over.

The acclaimed pianist Wilhelm Kempff bought a piano from Bluthner in 1967 , and, deeply impressed by it, continued to strongly support the Bluthner brand.

The Bluthner concert grand was awarded with a gold medal at Leipzig Fair in 1981 ; the fifth gold medal to date within Bluthner's history. A concert was held in celebration.

In 1996, to meet the growing demands of the now greatly recognized company, a new Bluthner factory was built in one of Leipzig's suburbs, Störmthal. Despite the company's advance in headquarters, their craftsmanship remained conventional.

A new Exhibition Hall was built for Bluthner instruments in 1997 . The pianos could now be displayed in large numbers; in total 30 uprights and 50 grands were usually exhibited.

In 2003 Bluthner became the desired instrument for prestigious pianists including Mikhail Pletnev and Artur Pizarro, establishing its status as one of the world's most respected piano companies.